In 1893 Winslow Homer painted “Fox Hunt” on Prouts Neck, perhaps on the current site of the golf course.  He probably didn’t realize that this painting would capture two of the significant piping plover predators – crows and foxes, both of which still roam Scarborough’s beaches.  Plovers, like all of our feathered and furry friends, face many challenges in their daily lives.  Dogs, it turns out, are not high on the list of those challenges.

Although no authoritative, ranked list of the causes of plover predation (or disturbance) exists, most threat measurements rank dogs well below other species.  Among the most often cited plover predators are crows, gulls, skunks, foxes, coyotes, and cats (house or feral).  Dogs are a mere nuisance compared to these other species which count plovers as part of a well-balanced daily nutrition program.

So why the over-the-top emphasis on dogs as a threat to plovers?  What other agenda is at work here?

A Species in Crisis?

Much has been made by the bird protection industry of the sad plight of our piping plover friends.  The facts, though, suggest the species is doing quite well under existing conservation measures.  For instance: 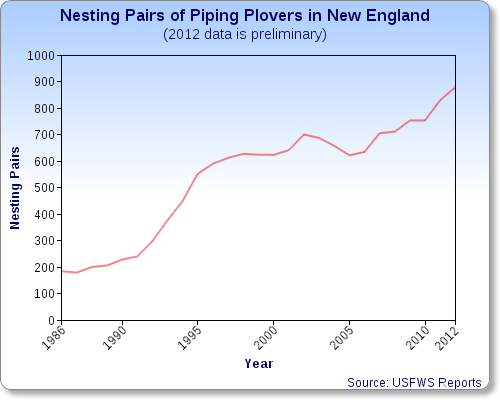 Note that the “recovery goal” set by USFWS is 625 pairs.

Bring on the Anecdotes!

Anecdotes are fun!  They add lots of color and warmth to a story.  They are especially useful when the facts don’t support the position one is trying to advance.

Among the anecdotes you will hear ad nauseam from the bird protection industry are those involving dogs “disrupting” the nests of plovers.  Or perhaps bothering them.  This particular species appears to have a very sensitive psyche.  (We will explore PBDS (post-beachfront-development syndrome) in plovers in a future posting.)

In any event, most of these anecdotes are very unpersuasive.  Many are based on “dog tracks” leading up to nest areas.  The qualifications of the individual making the assessment that the tracks are indeed those of a dog and not a fox or coyote are rarely if ever mentioned.  And even if an occasional dog does accidentally intrude in a plover nesting area, wouldn’t you expect a normal bird to have the innate ability to deal with it?  What are that particular bird’s chances against a skunk or a fox?

But there are also anecdotes you will never hear from the bird protection industry…  Like the occasional story that slips through the politically-correct filter into the press about how more human activity may in fact be better for plovers than less.   Or what about the radical notion that off-leash dogs are beneficial to plovers by discouraging the presence of non-domesticated animals that regularly consume plovers and their eggs as part of their diet – again: foxes, crows, gulls, skunks, etc.  (Note to budding scientists: I wouldn’t use that last hypothesis in a grant application to the Audubon Society.)

Here are links to a couple of stories that slipped through somehow:

1.  A 2011 Boston Globe article: The curious case of the piping plover

A couple of excerpts:

“Despite the image Goldenrod and the state’s Endangered Species Act seem to paint of plovers as delicate birds whose patterns of behavior and habitats must never be disrupted, plovers have shown a remarkable adaptability to humans. On the Fourth of July, the piping plover chicks on Kalmus Beach in Hyannis were happily feeding while a massive fireworks display exploded over their heads. In South Boston this year, a plover nest was spotted on the men’s side of the L Street Bathhouse, though it was gone by the time wildlife officials arrived to check it out.

“The main problem facing plovers today, Coleman says, isn’t off-road vehicles but natural predators. Sandy Neck has never lost a plover to human meddling, but this year, coyotes, crows, gulls, and other animals ate the eggs and chicks in 18 of its 44 nests. In Plymouth, a plover hasn’t been killed by a human since 1996; yet in 2005, all 15 plover pairs lost all their eggs to predators.”

2. A recent Cape Cod Times article: All sides weigh in on beach access during plover nesting

A couple of pull quotes:

“Such extensive closures didn’t help the bird much, Morris said. Predators and storms killed off many of the chicks, as had happened in prior years, and only three chicks on the southern trail and nine on the northern trail reached flying stage. Man is not the problem, Morris argued, and a vehicle ban didn’t contribute to any significant success.”

“Hodgson said he had heard options he hasn’t heard before during the meeting, like the ability to move a nest or reduce the buffer zone around a nesting pair so that vehicles can pass.”  [Editor’s astonished note: moving a nest — what a concept!]

Out on a Limb – Another Fearless Prediction

OK, a prediction of two people who you will not be heard from at tonight’s Ad Hoc Animal Control Advisory Committee meeting: the Town’s Piping Plover Coordinator and the Town’s Animal Control Officer.  That’s right, the two people you would expect would know the most about any issues with dogs and piping plovers will not be asked for their insights.

So any shred of credibility the AHACAC had – and it was a pretty darn small shred to begin with — will be eliminated.  When the final report is written, how will the Council be able to hold it up and crow that it was a fair and comprehensive review of the plover/dog situation when the two principal individuals with the most direct knowledge of “the problem” were not even asked for input?  Who’s writing the script for the AHACAC anyway?   Lewis Carroll?  Franz Kafka?  Monty Python?

Customer: “This parrot is no more! He has ceased to be! ‘E’s expired and gone to meet ‘is maker!…THIS IS AN EX-PARROT!!”

I hope to see you at tonight’s AHACAC meeting.  I’ll be the one banging two bricks against the sides of my head.