The past week has been a rough one for many Scarborough dog owners, not to mention those Scarborough citizens who expect a modicum of honesty from their Town officials.

First it was the meeting of the Ad Hoc Animal Control Advisory Committee (“AHACAC”) on January 13.  I must have missed something at the meeting.  I always had a clear understanding that “compromise” involved BOTH PARTIES giving some.  And yet, somehow, the “starting point” for a solution to the piping plover protection issue that appeared on the flipchart proposed the following changes to off-leash time:

Yikes!  Perhaps it was just me, but I saw a whole lot of taking and absolutely no getting.  But, fear not, Friends, that’s only the starting point!  (It’s hard to imagine what they’re still planning to take in the “negotiations,” isn’t it?)

“Of course we didn’t put that frog on your chair, Sister Mary Albert!”

And then there was the January 15 Council Meeting.  Not a one of our Councilors acknowledged even the slightest whiff of bias in the composition of the AHACAC.  “Don’t be foolish, Dear Citizens!  We, your esteemed Councilors, are pure as the wind-driven snow!”

Just for kicks, I went back to the video recording of the Council’s December 4 workshop to review the discussion of how the AHACAC would be formed.  Councilor Donovan’s comments on this subject were the most comprehensive:  “It would make great sense for the Chair and Vice-Chair to work with the Town Manager to begin to put together what would be a proposal for an ad hoc committee – what their role would be, what their time frame would be, what the composition would be.  That would then be shared with the seven of us so that we would be able to provide input to it.  And we’ll go from there…”   No other Councilor questioned his suggestion so it essentially became the last word and “sense of the Council” on the formation of the Committee.

So, at the workshop on December 4, the plan was clearly for Town Manager Hall to work with Councilors Sullivan and Holbrook to flesh out the Ad Hoc Committee’s charge, timeframe and composition and then solicit input from the other Councilors.  But now, none of the Councilors claims to have played any role whatsoever in selecting or reviewing the members of the AHACAC as presented at the December 18 Council meeting.  Huh?  So why did the Councilors decide not to do follow the plan they discussed at the workshop?

(One answer to that question comes to my perhaps overly cynical mind – By admitting to participation in an obviously flawed selection process, the Councilors would have given up plausible deniability of being involved in the charade.  Why not leave the risk associated with that exposure to the paid gun, the Town Manager?  That’s one of the things he’s paid for… to deflect political risk from the Councilors.)

And the beat goes on.

What “Science” can…and can’t… tell us

Much has been made of various scientific studies in the course of discussions about what is good and bad for our piping plover friends.  And I certainly agree that science can help inform any decisions that are made as we search for revised animal control and piping plover ordinances.  But I do strongly object to two misuses of science: (1) drawing conclusions when there isn’t enough data present, and (2) looking to science to answer questions that it is not capable of answering.  (I promise to be brief on this important, but less-than-thrilling topic.)

In a sense, science is merely commonsense dressed up in a suit and tie.  It extends and adds structure and precision to things we either know or intuitively understand.  In the current case, we know or intuitively understand that dogs can be a threat to piping plovers.  Science can dress that knowledge up a bit by discovering that, say, 80% of the time that a dog gets within 150 feet of a piping plover nest, the bird will fly off the nest.  That merely quantifies what we all know in our bones.  What science is unable to tell us is how important any one of the large number of environmental factors is in determining the productivity of piping plovers on any given beach or State or region.  Tides, weather, unknown species health issues, predation, food availability and human disturbance (in its numerous forms) all contribute in complex and interrelated ways to the health of the species.  To try to tease out and quantify the impact of off-leash dogs in the complex equation of piping plover survival and proliferation is not within science’s capability.

(2) The limits of Science

What I know about philosophy wouldn’t fill up a plover’s hot water bottle.  But a quick Google lesson on the limits of science reveals there is general agreement on at least two areas where science cannot be employed – questions about value (which are better pets, cats or dogs?)  and questions about morality (what universal rights should humans have?).  When everything else is stripped away, the current question about plovers, dogs and people comes down to a fairly simple value judgment – how much human enjoyment (expressed through people walking with their off-leash dogs on the beach) are we willing to give up in order to make an unquantifiable improvement to the lives of several pairs of piping plovers each year?  The “we” that needs to make this value judgment are the people of Scarborough, not the biologists of USFWS or Audubon.  This is not a scientific judgment; it is a social/political judgment.

Some will argue that, since dogs are a controllable element in the piping plover recovery effort, we must focus our attention on them.  So if foxes and crows are 50 times more of a threat to piping plovers than off-leash dogs, do we still need to banish the dogs?  Is that reasonable?

We need to recognize that there is, in fact, a limit to the lengths we will go to protect piping plovers.  Otherwise, we would prohibit all types of human activity on beaches – humans can accidentally step on (or pick up) chicks, jogging humans can disturb feeding piping plovers, some particularly uncaring humans will even intentionally inflict harm on plovers   But most beaches are not closed to all human activity because society has made a decision that the levels of risk associated with those activities are tolerable.  There is a limit, and we as members of society, not scientists, make decisions on trade-offs like that all the time through the political process.  This decision should be no different.

The Scarborough Harbor dredge project is really picking up steam now.  Speaking of picking things up, here’s a shot of the crane lowering the dredge barge (SS Electrolux) on to the gentle sands of Ferry Beach this past Thursday. 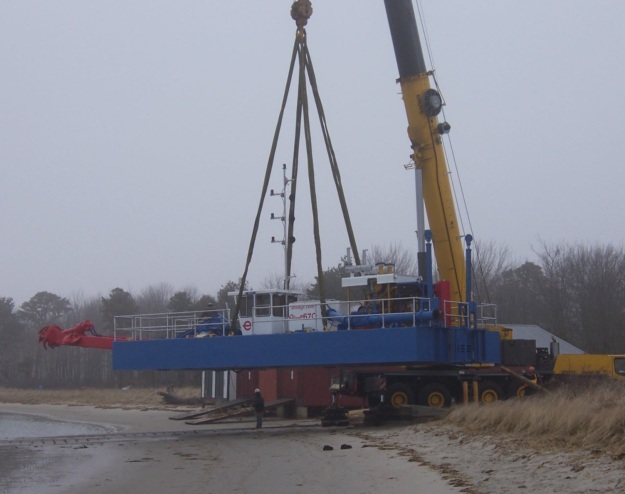 As of Saturday (January 18) the barge is still at Ferry Beach as the crew prepares some of the hundreds of feet of 14” PVC pipe that will carry the sediment from the harbor channel on to Western Beach.  It promises to be quite a show.  And since it won’t be repeated for 9-10 years, get your tickets now!

And while we’re on the subject of Western Beach… I didn’t realize until just recently that the Western Beach project is actually a two-fer.  Not only is the Beach being “re-nourished” (on the taxpayers’ dime, by the way), but there’s another project happening concurrently.  An old sea wall that prevents part of the golf course from having a major water hazard (the Atlantic Ocean) is being rebuilt.  That project, to the tune of $1.5 million I am told, also began in earnest this past week.

I have always found those signs proclaiming the “ecological fragility” of the dunes ironically amusing.  The dunes are especially fragile when a landowner doesn’t want somebody crossing them.

But apparently they are much less fragile when the preservation of a golf course is at stake, as the two pictures below attest.

As I was checking out the sea wall project at Western Beach, I couldn’t help but notice just how close two or three of the holes on the Prouts Neck Country Club Golf Club are to prime piping plover nesting and feeding habitat.  Shouldn’t serious consideration be given to closing the holes on the golf course that are within 150 feet of piping plover habitat?  The last thing the poor little guys need is a bunch of rowdy golfers, cigars in hand, storming around near their nests and whacking golf balls in their vicinity.  Can you imagine the amount of disruption and stress this must cause in a plover’s life?  [See above discussion of  trade-offs that get made all the time.]   But, country clubbers, fear not!  The affected holes will only be closed from April 1 through September 15!  And, in fact, the  holes may be released as soon as July 15 if none of the little guys show up.

Please Note: This blog entry has been produced with a minimum amount of color and capital letters in response to a reader complaint.  Next time though, watch out!  You’ll need sunglasses.

2 thoughts on “Einstein at the Beach”